The making of a post-human bestiary – 3 questions for the people in 3 acts
At the core of The People’s Opera House project is an operatically enhanced, live cinema film and performance TPOH will be creating with the people entitled “Mutate or Die”. The people are invited into the “directed evolution” conversation by way of three questions, which correspond to the three acts of the operatically enhanced, live cinema performance. From the people’s answers will emerge a collective imagining of  our post-human future and a bestiary of hybrid beings that will more than likely populate our not-too-distant future.

Act 2
Would you?
Would you willingly contribute your DNA and/or give birth to the creation of a transgenic trans-human child that had human parts and parts from other species? What species might that be?

Act 3
“Mutate or Die”
What do you envision a trans-human will look, feel, sound and act like in say, two-hundred years, five-hundred years, a thousand…you choose?

Impromptu performances on Adams Avenue
The day and time of these sessions will be announced the day before on the TPOH Facebook page. 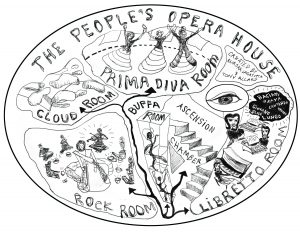 The first incarnation of The People’s Opera House was done in 2016 and was a collaboration between video and performance artist, Tony Allard and choreographer Aurora Lagattuta. It was presented in John Malashock’s Engagement Ring Series at the Dance Place, Liberty Station. Like the current project, The People’s Opera House at the Dance Place was an experiment in crowd-sourced creativity and democratized virtuosity and encompassed six dance studios which were transformed into immersive, interactive performance installations. It actively engaged the audience in choreographed and improvised dance, real time and pre-recorded video projections, live audio mixing, digital drawing and animation on mobile devices.