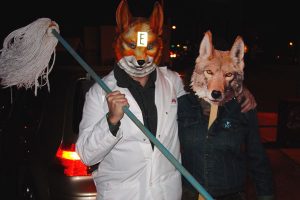 “The bottom of the mind is paved with crossroads.”
–Paul Valery

Heckety’s Origins
Heckety is a post modern trickster who does not perform for an audience, but rather, wanders about the streets and engages the public spontaneously in a series of what Joseph Beuys regarded as, “actions”. These improvisational and context-driven actions are intended to slip the noose of overly rationalized and socialized behaviors in public and reveal the uncanny and poetic depths of the collective unconscious.

Heckety does not ever speak and endlessly roams the crossroads of public spaces in pursuit of the slippery territory between rational and irrational behavior, between good and bad, between the invisibles and the visible. Dressed completely inappropriately for any occasion and lacking any manors, coolness, and style, Heckety aimlessly wanders the streets with his mailbox/backpack to interact with the public and collect odd object–which he places in the mailbox/backpack. While on the streets, Heckety engages in creative deception and trickery which is intended to bring opposites together, such as the beautiful and the ugly, noise and music, silliness and seriousness, and human and animal behavior. Heckety’s benevolent and non threatening actions oftentimes generates humbling embarrassment, laughter and liberation from self-consciousness. His actions have the potential to entice the public into the irresistible freedom from the prison cell of consensus culture.

After an undetermined amount of time, Heckety stops interacting with the public, sits down on the sidewalk and reveals the collection of odd objects he has in the mailbox/backpack. After the contents are revealed, Heckety quietly disappears and the performance ends.

My performance of “Heckety” is just one in a long line of trickster figures who have rambled through the history of the world–such as the Greek god, Hermes, the Native American Coyote, Eshu the Yoruba prankster from Africa, and the Norse creative troublemaker, Loki. In his insightful book, The Trickster Makes the World, Louis Hyde states, “Trickster the culture hero is always present; his seemingly asocial actions continue to keep our world lively and give it the flexibility to endure. “ Out of a sheer, even desperate, necessity to meaningfully endure a contemporary world of 2006 gone “off the deep end”, I continue to let Heckety have a go at keeping the overly rationalized and totalitarian-esque behavior of global culture flexible and livable.